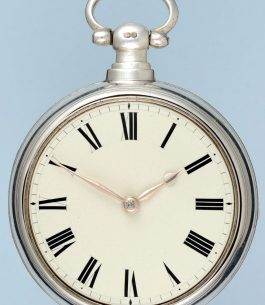 In excellent overall condition.  Edward Massey of Coventry and London developed the crank roller escapement which has five variations.  He retailed few watches under his own name but made them for other makers.  The underside of the cock not only bears his initials and serial number but also the stamp of the ebauche supplier, “TB” in a rectangle. This is repeated on the dust cover.  S J Whitwell has not marked the movement with a number or town
Date :  Hallmarked Birmingham   1821
£925.00
Small Silver Duplex Pocket Watch 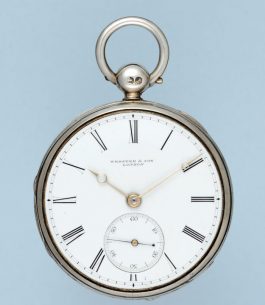 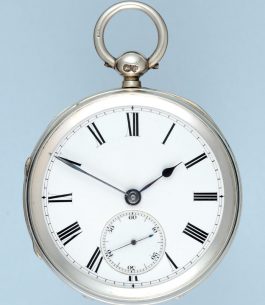 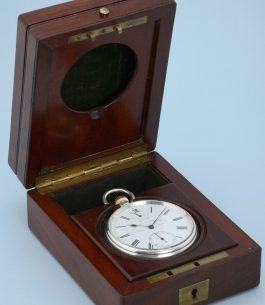 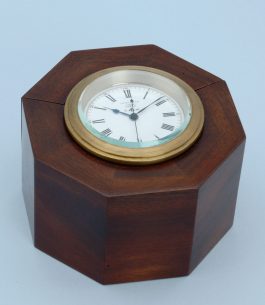 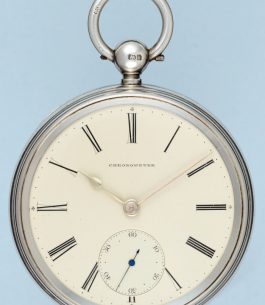 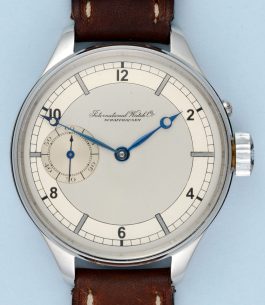 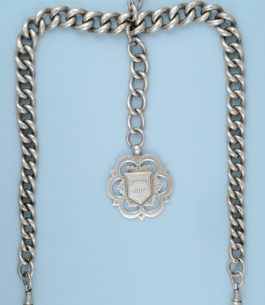 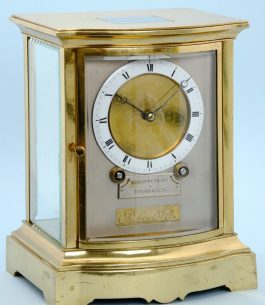 An interesting clock.  The tourbillion was introduced to cancel out positional errors.  Its use in a platform has no technical advantage but does allow the maker to display his skill
Date :  Circa   1900
£9,800.00
Tortoiseshell Singing Bird Box 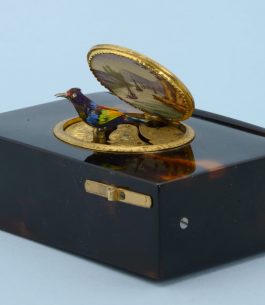 A late 19th Century Swiss automated singing bird in a tortoiseshell box .  Brass movement keywound through the base.  Bellows and piston mechanism to vary the song of the bird. .  The bird covered in iridescent humming bird feathers.  Moving the gilt lateral slide on the front of the box causes the gold and enamel oval lid to open and the bird to hinge into an upright position.  It starts its song, rotates left and right, flaps its wings and opens and closes its beak.  Moving the slide to the left folds the bird back into the case and the lid closes.  Tortoiseshell box with a compartment at the back with a hinged tortoiseshell lid. The top of oval gilt hinged cover to the bird decorated with a polychrome enamel floral scene. Inside a lakeside alpine scene.  Gilt tooled red morocco box lined with purple velvet. 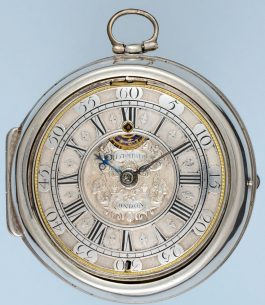 A rare late 17th Century English verge, silver champleve dial with blue steel regulator disc in silver pair cases.  Deep full plate fire gilt movement with Egyptian pillars.  Fusee and chain with worm and wheel barrel setup between the plates.  Unusual large pierced and engraved bridge cock depicting drums and flags.  The finely chased and engraved parcel gilt silver cartouche at its centre bears a portrait of the future Queen Anne.   Winding through the cock and four arm plain steel balance.   Pierced and engraved plate retaining the regulator slide which is adjusted by the gilt and blue steel disc set below the numeral “XII” on the dial.  The two are connected by a shaft running through the hollow barrel arbor.  Signed silver champleve dial.  Roman and Arabic numerals, fine blue steel beetle and poker hands. Matching silver pair cases, split bezel silver pendant and bow square hinge to the outer case.  Maker's mark IB” below a crown and number corresponding to that on the movement.

A rare watch in very fine condition.   David Lestourgeon, London 1681, free of the clockmakers Company 1698 – 1731, a fine maker.  A copy of his will, which lists him as “Watch Maker and Innholder of Finch Lane , City of London” accompanies the watch and can be viewed at the National  Archives in Kew. The use of the bridge cock influenced by his French origin.  His father, also David,  was a Huguenot who moved from Rouen to London in 1680.  Several watches known a number of which have royal connections.   Two interesting examples  with mock pendulum dials by Lestourgeon are in the Museum of London and the British Museum.  The watch in the Museum of London has a bust of William III, the date of his death (8th March 1702) and a skull and cross bones above the letter W on the back of the movement.  The watch in the British Museum (Ref No. 1958,1201.6161958,1201.616) is illustrated in Brittens, the backplate bearing a portrait of Queen Anne flanked by Orb and Crown and below the inscription “Regn incip 8 mart 1702”. This case of this watch is by the same maker and also bears the number, 5488, significantly higher than this example.  Casemaker, John Banbury, his mark appearing on the 1682 plate, also worked for Knibb, Tompion and Massy.
Date :  Circa   1695
£5,500.00
Silver Mock Pendulum Sun & Moon Verge 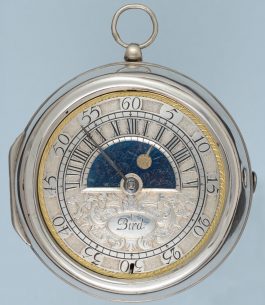 A fine late 17th Century English mock pendulum verge with Sun and Moon champleve dial in silver pair cases.  Deep full plate fire gilt movement with tulip pillars.  Fusee and chain with worm and wheel barrel setup between the plates.  Mock pendulum cock with decoratively pierced and engraved table, open semi circular section to reveal the oscillating bob on one arm of the steel balance. Pierced and engraved foot and plate for the regulator square.  Signed silver champleve dial, Arabic numerals for the minutes, blue steel poker hand. The hours are indicated by a blue steel disc which rotates once every 24 hours.  This is viewed through a semi-circular aperture and has engraved on one half the gilt sun and on the other the moon.  At the edge of the semi-circle the hours are marked from six through twelve and back to six in Roman numerals.  As the sun disappears at the right of the aperture the moon appears at the left.  Plain silver  inner case, silver pendant and ring bow,  maker's mark “Bl”.  Plain silver outer case. 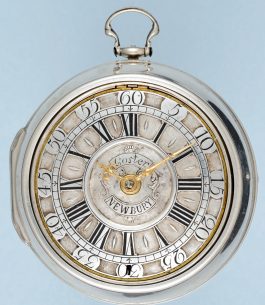 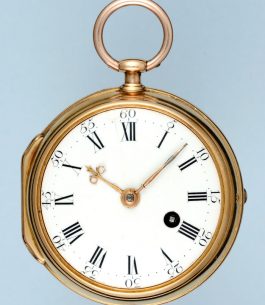 A rare chance to own a watch by this famous  watchmaking partnership which is little changed from when from the day it was made.  The cylinder retains the original Graham-type banking of a pin in the lower plug. Unusually for an English watch it is wound from the front.  It is interesting to note however that the dust cover is still made with a collar for the winding square which was plugged before gilding.  As the date of the case is correct for the number of the movement it seems that a “standard”  movement was used when the customer required a consular cased watch.  Thomas Mudge & William Dutton were both apprenticed to George Graham continuing the line of famous makers from the 17th Century.  This example was made while  Mudge was still an active in the partnership.  He moved to Plymouth in 1770 due to ill health.  Casemaker Peter Mournier who was most commonly used by Mudge and Dutton
Date :  Hallmarked London   1768
£3,600.00
Large Champleve Dial Verge Coachwatch 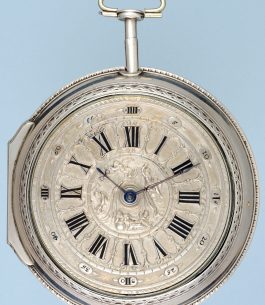 An unusual watch in excellent overall condition.  Markwick Markham made many watches for the Turkish market.  The regulator dial with Turkish markings shows that this watch was also exported but supplied with a standard dial
Date :  Hallmarked London   1786
£8,500.00
Silver Pair Cased Verge 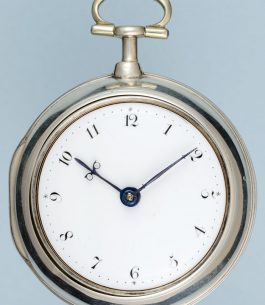 In excellent overall condition.  Possibly signed for Catherine Collett, the widow of William Collett.  The Colletts were a family of watchmakers based in Uxbridge, a market town and staging post at the time to the west of London.  In December 1794 their premises were burgled.  William Collett died before the Old Bailey trial in January 1795 when the perpetrator, Michael Love, was found guilty and sentenced to death.  The transcript of the trial is online and the will of William Collett accompanies the watch and can be viewed at the National  Archives in Kew
Date :  Hallmarked London   1797
£580.00
English Verge with Named and Dated Dial 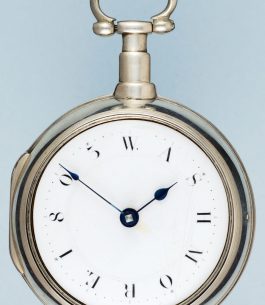 Watches which have the numerals replaced by the owner's are not common but this is the first we have seen which includes the year
Date :  Hallmarked Birmingham   1802
£750.00
Centre Seconds Calendar Verge 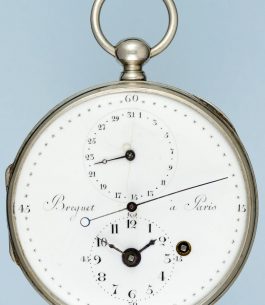 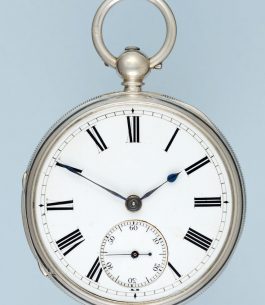 A late 19th Century English lever with Burdess patent winding in a silver open face case.  Full plate gilt movement with dust ring hinging from the case.  Fusee and chain with Harrison's maintaining power. Engraved gilt cock with garnet endstone, blue steel Boselyregulator.   Compensation balance with blue steel spiral hairspring.  English table roller lever.  The winding lever protrudes through the inner dome of the case, engaging a ratchet mounted on the fusee square via a sprung pawl.  The watch is wound by moving this lever backwards and forwards.  The hands set by moving a wheel at the edge of the dial.  White enamel dial with subsidiary seconds, blue steel hands.  Engine turned silver open face case with ribbed middle.  The back cover which is decorated with a vacant cartouche set within a circle is opened by depressing a button in the pendant.  Maker's mark “EH” and number corresponding to that on the movement.

An excellent early example of one of these patent keyless English lever watches which have become scarce in recent years.  Adam Burdess took out his patent only a year before this watch was made.  See the Camerer Cuss Book of Antique Watches page 245 for number 8524, hallmarked 1875.
Date :  Hallmarked Chester   1881
£950.00
Gold Half Hunter Karrusel by Barraud & Lunds 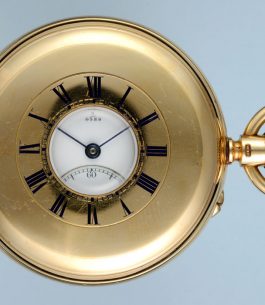 A fine example of late 19th Century English watchmaking showing the use of a Bonniksen karrusel by one of the leading makers of the period.  See Pocket Watches by Reinhard Mieis page 311 for a similar watch.
Date :  Hallmarked London   1896
£5,850.00
English Centre Seconds Chronograph 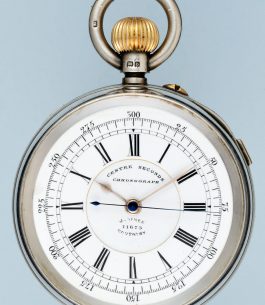