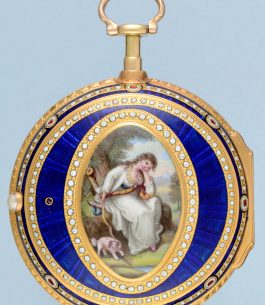 A fine 18th Century English verge in gold and enamel pair cases.  Full plate fire gilt movement with square baluster pillars.  High quality train, eight leaf pinions and six spoke crossings to the wheels.  Pierced and engraved cock, silver regulator disc. Fusee and chain with worm and wheel barrel setup between the plates. Plain three arm steel balance, blue steel spiral hairspring.  White enamel dial with Roman and Arabic numerals, pierced gold hands.  Plain 22 carat gold inner case, gold pendant and bow, maker's mark “RP”.  Fine gold and enamel outer, the bezel decorated with bands of translucent dark blue enamel either side of a row of white faux pearls.  This decoration repeated on the back with an additional row of faux pearls around a ground of translucent dark blue enamel.  At the centre a finely painted scene of a young lady resting in the countryside, a spaniel at her side. 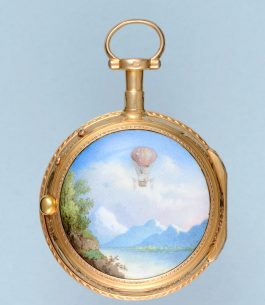 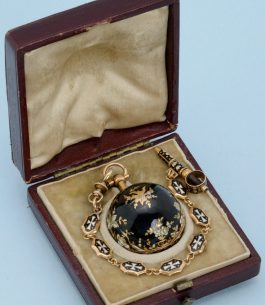 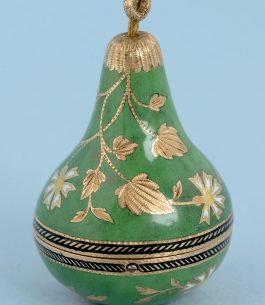 An early 19th Century Swiss verge in a gold and enamel watch in the form of a pear.  Full plate gilt fusee movement.  Finely pierced and engraved bridge cock with steel coqueret, plain three arm gilt balance with blue steel spiral hairspring.  Silver regulator dial with gilt indicator.  Winding through the white enamel dial, Arabic numerals, blue steel hands.  Attractive small gold and enamel case in the from of a pear.  Engraved gold foliate design with white and yellow flower within the green champleve enamel ground.  Bands of black champleve enamel where the halves of the case meet.  Gold engraved stalk at the top and an engraved dimple in the base. 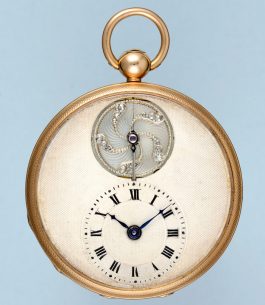 An attractive unusual watch with a decorative balance swinging on the dial in excellent overall condition
Date :  Circa   1830
£4,250.00
Diamond Set Ball Watch 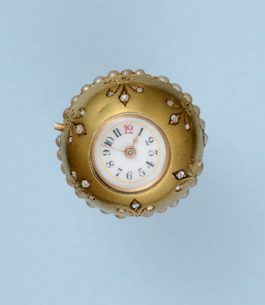 A good example of these keyless ball watches with a compensation balance and lever escapement
Date :  Circa   1890
£2,450.00
Gold and Enamel Pendant Watch 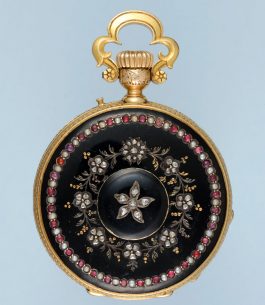 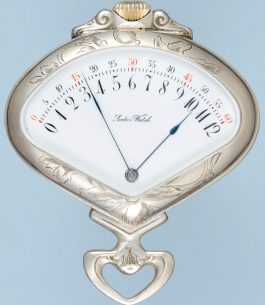 An interesting and attractive well made novelty watch in excellent overall condition.  Rare inclusion of a presentation box.  See Pocket Watches by Reinhard Mieis page 233 for a similar watch by the same manufacturer
Date :  Circa   1890
£3,200.00
Gold and Enamel Ladies Pendant Watch 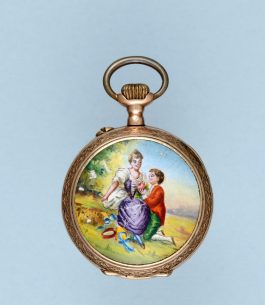 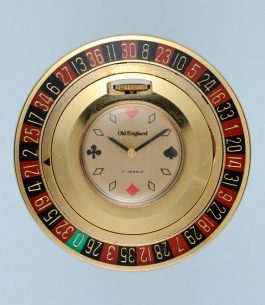 A 20th Century Swiss lever in an unusual gilt and enamel roulette game case.  Nickelled three quarter plate 17 jewel keyless movement with going barrel. Plain cock with shockproof jewelling, plain three arm balance with spiral hairspring.  Club foot lever escapement.  Signed gilt dial with the suits of playing cards at the quarters, black hands. Unusual gilt metal case in the form of a roulette wheel, the outer section with alternate red and black numerals and a single green zero, rotating freely.  The game can be played by holding the centre with the watch between thumb and finger while running the edge of the wheel along a surface, the numeral indicated by a small arrow.  The back cover printed “Casanova Club” . 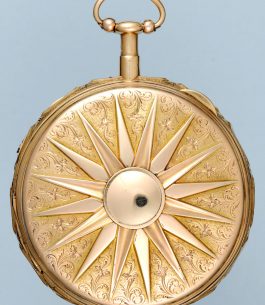 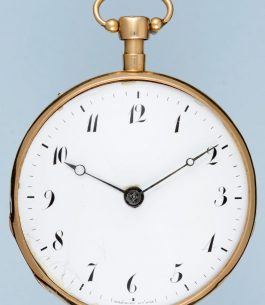 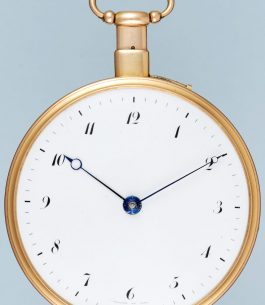 An unusual attractive large repeating watch in excellent overall condition.  This seems large to be used by a lady suggesting the inscription may be that of the person giving the watch
Date :  Circa   1830
£4,500.00
Gold Quarter Repeating Cylinder 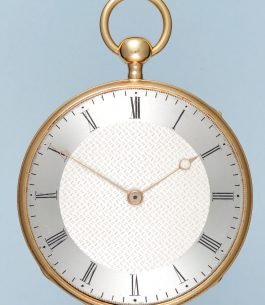 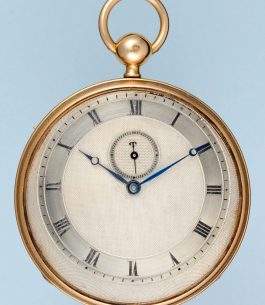 An unusual quarter repeater in excellent overall condition.  Offsetting the cannon pinion is not only pleasing to the eye but also allows the use of a larger barrel
Date :  Circa   1830
£3,750.00
Gold Quarter Repeating Cylinder Pocket Watch 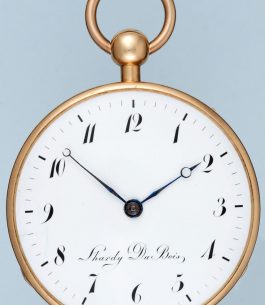 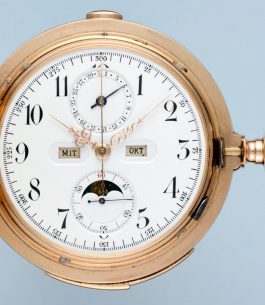 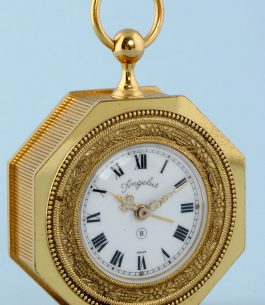 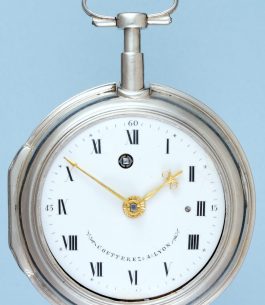 A very rare form of escapement, possibly less than ten exist.  Few were produced, mainly by French makers and this is the only one known with repeating work.  See Chamberlain's Its About Time page 149 for a description of the escapement and page 319 for a short biography of Henry Sully who developed the escapement based on Debaufre's design in about 1720.  An article about the escapement by Charles Allix is in the Winter 1980 edition of Antiquarian Horology.  In excellent condition the movement shows evidence of experimentation that was not fully developed by the maker
Date :  Circa   1780
£21,000.00
Very Rare Double Wheel Debaufre 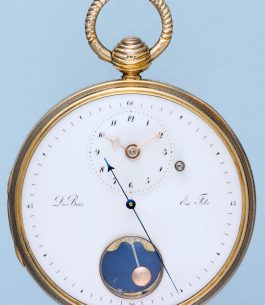 A very rare escapement combined with other interesting features.  This watch is shown on pages 208 and 209 of the Camerer Cuss Book of Antique Watches.   The book notes that the case is Swiss, the hallmarks having been applied when the watch was imported into England.  The plate is engraved “I H London”, perhaps the importer.  The debaufre escapement is also known as a chaffcutter, Ormskirk  or club footed verge.  It was the first frictional rest escapement invented by Debaufre in 1704.  Rarely used until it was taken up by Lancashire makers early in the 19th Century.  The doubled wheeled variation is the first we have seen.  Dubois et Fils, Paris 1770 – 1800, centre seconds pirouette watch movement in the Guildhall Museum
Date :  Circa   1790
£17,000.00