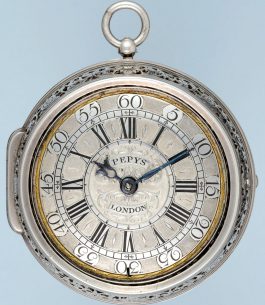 John Pepys, London, apprenticed 1672, Clockmakers company 1680 and Master 1707 – 1715.  The outer is most probably a replacement made for the watch early in its life by William Sherwood who was favoured by Thomas Tompion
Date :  Circa   1685
£9,700.00
Silver and Tortoiseshell calendar Verge Alarm 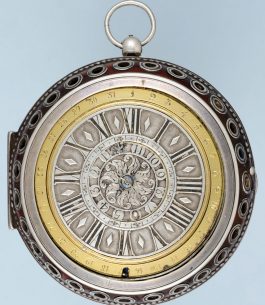 In fine overall condition.  It is unusual to find calendar indications on alarm watches of this period.  Claude Viet, free of the Clockmakers Company 1698.  Watchmaker to the Queen – died 1734.
Date :  Circa   1695
£14,500.00
Gold and Enamel Dress Watch and Chain 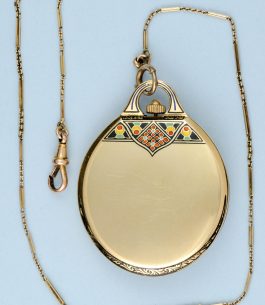 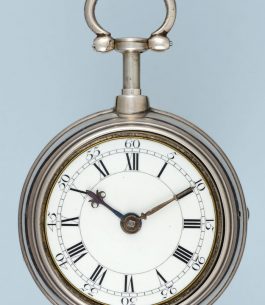 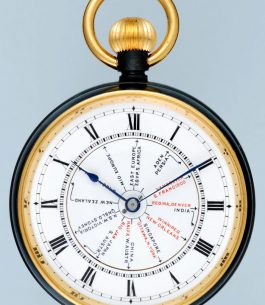 An early 20th Century Swiss lever with world time indications in a gunmetal open face case.  Gilt three quarter plate keyless movement with going barrel.  Plain cock with polished steel regulator, uncut bimetallic balance with spiral hairspring.  Club foot lever escapement.  Unusual white enamel dial, the outer ring of  Roman numerals with a finely divided chapter at its inner edge .  The enamel centre of the dial rotates with the hour hand and is marked with major cities around the world, those marked in red being behind Greenwich.   Blue steel hands, the hour hand to be set by the watchmaker to the owners time zone.  Plain open face case with clip on back and bezel,  gilt winding button and bow. 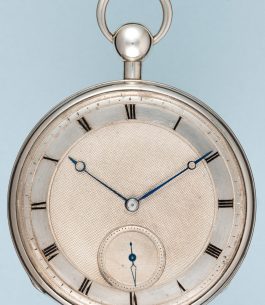 It is very unusual to find a continental repeater with a duplex escapement.  The cylinder escapement was almost universally used at this time
Date :  Circa   1820
£1,950.00
Gilt Triangular Masonic Watch 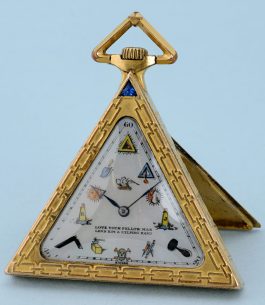 A Swiss lever Masonic watch with mother of pearl dial in a triangular gilt metal case.  Circular keyless nickelled split three quarter plate movement with going barrel.  Plain cock with polished steel regulator.  Compensation balance with blue steel overcoil hairspring.  Club foot lever escapement.  Triangular mother of pearl dial with polychrome Masonic symbols in place of the numerals and “Love your fellow man – Lend him a helping hand” below the centre.  Blue steel hands.  Gilt metal case with decoration of a chain around the bezel, a circular sapphire blue stone below the pendant.  The back, which is hinged to form an easel stand, is chased and engraved with a temple and many other Masonic symbols.  The edge of the case also decorated with further masonic symbols.  Circular clip on gilt cuvette. 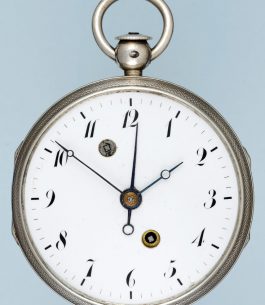 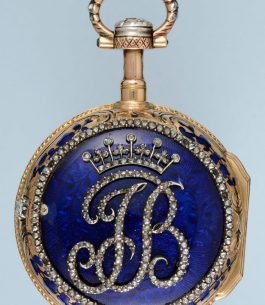 A late 18th Century Swiss quarter repeating verge in a diamond set gold and enamel consular case.  Full plate gilt fusee movement.  Finely pierced and engraved bridge cock with steel coqueret, plain three arm gilt balance with blue steel spiral hairspring.  Silver regulator dial with blue steel indicator.  Push pendant quarter repeating on a bell in the case.  Winding through the fully restored white enamel dial, Arabic numerals, gold hands.  Gold consular case discretely pierced to allow the bell to sound clearly.  Engraved bezels decorated with translucent blue champleve enamel and a border of small diamonds.  The back of translucent dark blue enamel over an engine turned ground applied with a diamond set monogram and coronet above.  Diamond set gold bow, a large diamond set in the end of the pendant and another in the case button.  Small pulse piece in the front bezel and a slide under the bezel to allow the watch to be set to repeat “a toc”. 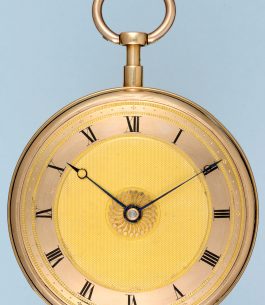 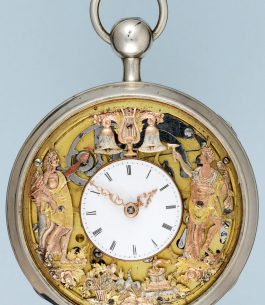 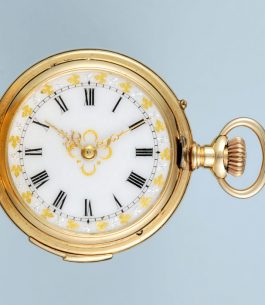 Few small repeating watches were made, even fewer survive intact as they were so often converted to wrist watches
Date :  Circa   1890
£2,750.00
Small Gold and Enamel Quarter Repeater 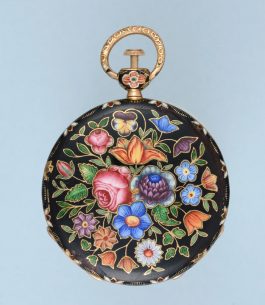 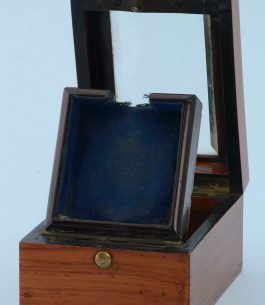 A small glazed satinwood box watch stand.  Rectangular box veneered in satinwood, the glazed opening in the top cross banded and the edges brass strung.  Inside a square hinged holder for the watch lined with blue velvet is raised by a spring when the lid is lifted. 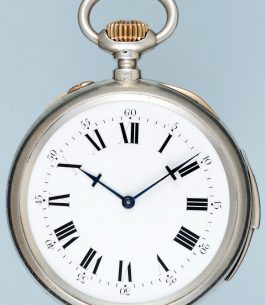 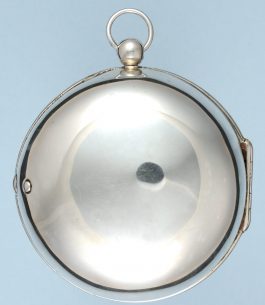 A late 17th Century verge with silver champleve Sun and Moon dial in silver pair cases.  Deep full plate fire gilt movement, broad tulip pillars.  Fusee and chain with ratchet and click wheel barrel setup between the plates.  Pierced and engraved cock with unusual small pierced and engraved foot.  Plain steel balance, silver regulator disc.  Silver champleve dial, Arabic numerals for the minutes, later gilt minute hand. The hours are indicated by a blue steel disc which rotates once every 24 hours.  This is viewed through a semi-circular aperture and has engraved on one half the gold sun and on the other the silver moon.  The border of the semi-circle marked for hours from six through twelve and back to six in Roman numerals.  As the sun disappears at the right of the aperture the moon appears at the left.  Plain silver pair cases, silver ring pendant and bow. 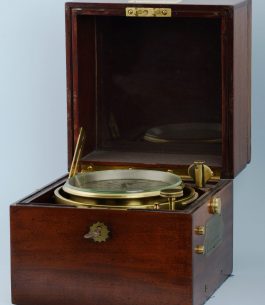 Ordered by the Indian Government and supplied in 1910 this chronometer is fitted with Auxiliary compensation to the balance.  Victor Kullberg was born in Sweden in 1824 and moved to London in 1851 where he established a business making fine watches and chronometers. In addition to selling under his own name he also supplied to many English retailers.  He almost always used the fusee in a reverse configuration to reduce friction and wear on the arbors.  He experimented with balances on his chronometers patenting flat rim varieties.  His chronometers won many medals for their timekeeping in the later half of the 19th Century.  The firm continued making chronometers after his death in 1890
Date :  Circa   1910
£5,750.00
French Oignon Pocket Watch with Cartouche Dial 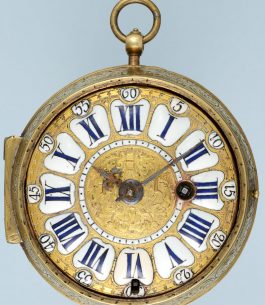 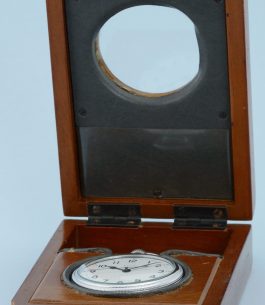 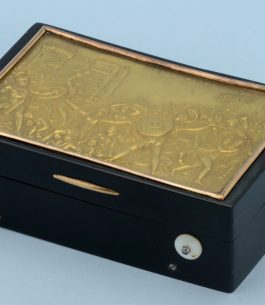 A fine mid 19th Century Swiss tortoiseshell musical box with a repousse scene to the lid.  Small rectangular barrel  type musical mechanism with a choice of two tunes.  The tines arranged in sixteen groups of four and one of six.  Going barrel wound with a male key from below.  Rectangular tortoiseshell box with engine turned tortoiseshell base.  Two mother of pearl discs on the front slide to actuate the music and change the tune.  The lid with full length piano hinge opens to reveal the mechanism under a shaped translucent horn cover.  Inset into the lid a fine chased and engraved rectangular scene of The Intervention of the Sabines.  At the lower right hand corner the signature “Morel F”.  The scene protected by a translucent horn cover in a gold frame.

An unusual box in fine overall condition.  The scene taken from from the 1799 painting The Intervention of the Sabine Women by Jacques-Louis David now in the Louvre, Paris
Date :  Circa   1860
£7,500.00
Tortoiseshell and Gold Purse Watch 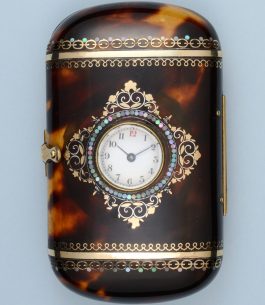