Woman on the hunt for soldier’s antique pocket watch descendants


London antique pocket watches are often steeped in history and intrigue for many people and there is likely to never be an ending to these pocket watch stories. One watch that could make its way back its ancestors is currently in the possession of a woman living in Northumberland who is putting her efforts into finding the family of a First World War soldier in order to return a pocket watch to them. 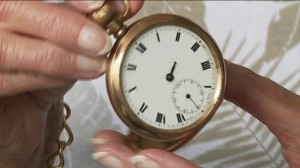 The watch was given to Private Wesley Jackson of the 51st Northumberland Fusiliers by the “inhabitants of Carshield and District” to commemorate his part in The Great War.

Joan Henderson of Haltwhistle inherited the watch from her father who in turn was given it by his father who ran a drapers shop in the town. Joan believes the watch may have been bartered for goods at the shop but she now wishes to return it to Private Jackson’s descendants.

Let’s hope she finds Private Jackson’s family so the watch can be returned.