What is the tiny pocket on your jeans actually for?


Something that many of us have been wondering for some time now is what the fifth pocket on our jeans is actually for. You know, that tiny pocket that sits within the front pocket. The rumours have gone around over the years about it being a coin pocket and a ticket pocket or as simple as a fashion statement, yet the mystery still seems to linger. If you are wondering what it is actually for, then read on to find out! 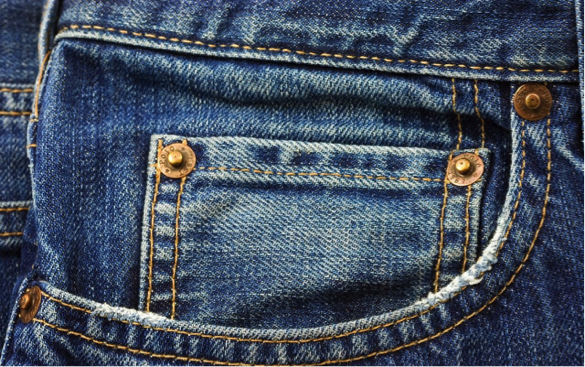 The small pocket is actually for a pocket watch, known quite simply as a ‘watch pocket’, naturally it is too small to fit much else in, but was perfectly designed for antique pocket watches many years ago. It all started in 1879 with Levi’s; their first ever pair of jeans to hit the market had only four pockets; 3 in the front and 1 on the back. In a blog, Levi’s confirmed this statement by commenting “The first blue jeans had four pockets – only one in back and, in the front, two plus the small, watch pocket.”

Supposedly this was created because, in the 1800s, cowboys kept their pocket watches on a chain in their waistcoats, but this often led to them being smashed and broken. Therefore, Levi’s came up with the ingenious idea of a watch pocket, to keep their precious devices safe. This is again confirmed on their website with the comment “Originally included as protection for pocket watches, thus the name, this extra pouch has served many functions, evident in its many titles, frontier pocket, condom pocket, coin pocket, match pocket and ticket pocket to name a few.”

Today, it is more commonly known as a coin pocket, due to the increase in men wearing a wristwatch rather than a pocket watch. Keeping in tradition, however, many jeans manufactures still equip each and every pair with this precious pocket that, in all honesty, only holds enough change for the car park! Over time, this pocket has been made progressively smaller to serve the purpose of being a coin pocket, rather than a watch pocket!

Why not bring the watch pocket back to life and store your favourite antique watch in it whilst you are out and about?