What is the connection between Levi Strauss and pocket watches?


Most, if not all of us, have seen those stereotypical films of American kids in the 1950s wearing the blue jeans and white T-shirt combo that was the fashion at the time. When matches with a pair of high-top tennis shoes it was virtually an unofficial uniform. But when we indulged in the films which starred these American ‘cool cats’ did we ever pay much mind to the details of those must-have trousers? 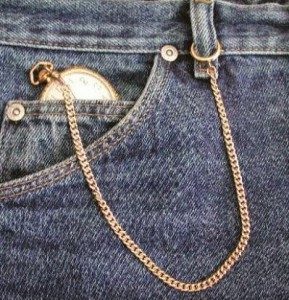 For most people there is an almost automatic selection to put on a pair of jeans when we get dressed and not at work, it’s just the norm in western culture, but have you ever looked at the right-hand pocket and wondered what that little pocket was for? Let us enlighten you.

During the late 1800s cowboys, miners and other outdoor workers in America would often keep a watch, similar to that of a half hunter watch on a chain in the pocket of a waistcoat or vest. Then in 1873 the world-renowned Levi Strauss introduced the small pocket we are sure you are currently checking out on your denim trousers right now was designed expressly to hold a pocketwatch. The original blue jeans were made with four pockets—one in back followed by two in front with the addition of a small pocket stitched and riveted to the top of the right front pocket. This smaller pocket was included solely to provide adequate protection for pocketwatches and thus the name, watch pocket.

Ever since its first appearance this extra pouch-like pocket has had many functions, evident in a few of its other names: frontier pocket, coin pocket, match pocket and ticket pocket. Not surprising that many people today have no real idea of what that little pocket is called or what the Levi Strauss Company had in mind when they included it in their denims- if you didn’t know, now you know.