The story of the Father of the Modern Clock


Following centuries of reverting to analogue watch designs that worked through the flow of water to calculate passage of time, for example. Modern human civilisation was successful in eventually achieving ways and means in which a precise clock that accurately told the time could be made. 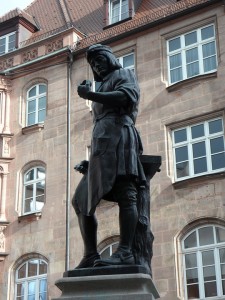 There were a variety of inventors before the eventual breakthrough who inadvertently assisted in the first working model. There are some names who have been forgotten by history, but there are still some that are recognised today for their inspiring work – Su Sung’s masterful water clock from 1092 being one of them.

Even though our history books may have forgotten about many watchmakers and innovators before us, there is one that has stuck in the minds of the modern scientific community, a man by the name of Peter Henlein, who has been accredited with the status of ‘Father of the Modern Clock’.

The man from the Nuremberg, Germany, is the originator of the entire clock making industry that we know today.

Who is Peter Henlein and what do we know about him?

Peter Henlein was born in 1485, and to this day there is still little known about his early life, but it has been claimed he became an apprentice, working as a repair man and locksmith to cut his teeth in the trade.

After the death of a close friend through an altercation, Peter immediately went to the local Franciscan monastery where he found safety and settled down, away from the trouble that he and his friend had embroiled themselves in. Wind the clock forward four years later and we find that Henlein has once again returned to the Nuremberg, and by this time he had established himself as one of the most famous locksmiths around, known notably for his ability to create small spring-powered brass clocks, something that was extremely rare and expensive during this period. As a result of his popularity and notoriety for his ability, it wasn’t uncommon for local nobility, along with those further afield, to get in touch with Henlein, often on a regular basis, to place orders for ever more beautiful and smaller clock designs.

In terms of the historical records that are available, Peter’s first clock was created back in 1510, and just over three decades later, in 1541, Henlein was renowned for his craftsmanship and precise skills, leading to him being tasked on building not only small clocks but also a big tower clock for Lichtenau Castle, in Bavaria.
There was a huge gulf in terms of Henlein’s creations and the antique watches we’re accustomed to today, due to the fact that his spring designs were not particular accurate, with some losing several hours in a single day at times. Additionally, they weren’t especially portable, with his creations mainly measuring in at around 3 inches in size, making them better suited to be worn as a pendant, rather than used as a pocket watch. However, it didn’t take long for clocks that were made by Peter Henlein to become a complete hit within European scientific circles, and eventually by the general European population as his fame remained at a prominent level.

Now, in this day and age, the name Peter Henlein is cemented as the name people consider to be associated with the father of modern clocks. This still rings true regardless of the fact that Henlein was not the first locksmith to make small clock designs, or be responsible for the discovery of the key clock component – the mainspring.

Peter Henlein passed away in 1547 in the knowledge that his invention will live forever, and we’re sure he would be suitably impressed with how things have progressed since he was producing his movements.