Before we get into the full details of this intriguing notion, just consider, would the world run more efficiently if the time was the same in every corner of the globe?

A significant plan has been created to rid us of global time zones and instead have a single “Universal Time” system. It’s worth mentioning that this is gathering a fair amount of support too! 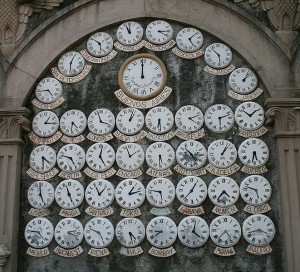 Well, this is an interesting one. The idea behind tossing the often confusing landscape of global time zones by the wayside is the brainchild of Steve Hanke, an economist with John Hopkins University and senior fellow with the CATO Institute think tank. He’s joined by his colleague Dick Henry, a professor of physics and astronomy at the Baltimore, Maryland institution in initiating the proposal.

Forget Russia’s 11 different time zones and the peculiar 15-minute time difference Nepal sustains from neighbouring India, it would all be simplified by simply conforming to a single, universal date and time.

This notion would be based on the existing measure of Coordinated Universal Time, which functions through zones 12 hours ahead or behind either way. This would then function through a 24-hour clock, the same that now sees individual governments decide their zone.

The experts behind the idea claim the pluses of new streamlined communications, trade and travel, would be substantial. But the switch over to Hanke-Henry Date and Time, which would see 7am time here in London also being 7am in Los Angeles, would create sizable disturbance.

Any change would bring about political deliberations to any application to modify the clocks as we know it. Here in the UK, a campaign supporting adoption of Daylight Savings Time, or British Summer Time, on a permanent basis, aligning the nation to the clocks of the continent, was declined by Alex Salmond.

The academics have stood by their plan, citing that at a minimum of five countries had changed their time zones in the 12 months. “It remains a political football, which would disappear if our ideas were adopted,” they told The Washington Post. “Today, much activity is global, and one time is called for. You’d quickly get used to the new reading on your watch and your clock.”

People travelling would benefit too, is another statement from the two experts. “The reason all the airlines in the world use, today, now, Universal Time (Greenwich time), is so that planes don’t crash into each other. Every pilot and navigator knows what time it is. As it stands now, we passengers don’t have what the pilots do have and we miss flights because of clock issues and time zones and daylight savings time.”

Local time zones across the pond in the United States came in due to the development of the railroads. “Today the agency of the Internet has annihilated time and space completely, and has set us up for adoption of world-wide time,” they said. “From a physics point of view, there is only one time! And this principle of physics lines up perfectly with the principles of economics.”

Captivating the idea of acceptance to bring change at international level is a stumbling block. As Hanke and Henry state “(Former President Dmitry) Medvedev consolidated Russian time to some extent in 2010, but these reforms have been undone by the Duma in July 2014. Bungled implementation of a good idea. Now North Korea has adopted a half-hour difference between Chinese time and Japanese time. Confusion abounds!”.

In Indonesia, where Hanke acted as the chief economic adviser to former President Suharto, there has been an official proposal to eradicate two of their three time zones for economic reasons.

The academics have also previously prepared a case for a fresh calendar to that of which we already use that would see every date fall on the same day of the week, annually. This new ‘invention’ of the calendar would streamline holiday scheduling and financial accounting Hanke and Henry claim.

Furthermore, the proposal would see two 30-day months followed by one 31-day month. This would also see an extra week called Xtr added on every five or six years in order to bring the calendar in sync with the changes of the seasons.

The HH Permanent Calendar would be officially unveiled from January 1st, 2018 precisely 12 months after the Universal Time proposal is launched “everywhere on earth, and forevermore”, the plans say.

This of course would not affect pocket watches for sale, but what do you think about the changes that Hanke and Henry are putting forward? We’d love to hear your thoughts. Get in touch with us on social media with your opinion.