We see antique watches for sale on a daily basis but one particular solid gold Rolex watch given to Second World War leader Dwight D. Eisenhower was set to become the world’s most expensive watch after it emerged that it was set for auction in America. 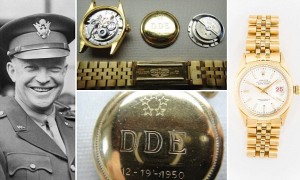 The 18-carat timepiece was said to be the most historically significant ever made by the renowned Swiss watchmakers. It was estimated to sell for well over $970,000 when it was auctioned for the first time in Boston this month.

The watch was gifted to American military mastermind Eisenhower by Rolex in 1951, seven years after he had successfully led the Allied forces in the D-Day landings.

Rolex created the timepiece and engraved it with Eisenhower’s initials as well as an additional with five stars which symbolised Eisenhower’s rank as General, and the date he was appointed Supreme Commander of NATO.

This movement was also the 150,000th made by Rolex – Winston Churchill had been presented with the landmark 100,000th timepiece, while the 50,000th had gone to Swiss army general Henry Guisan.

The watch became Eisenhower’s favourite and two years after receiving it he wore it into the White House where he was appointed the 34th President.

The watch was tipped to surpass the world record for a Rolex watch which was set in 2013 when a rare 1949 Rolex Oyster Perpetual sold for around £740,000.

However, recent bidding for the watch in Bostonreached highs of $475,000, unfortunately the reserve price was not met and so the watch will presumably stay with its current owner.