A rare, highly sought after antique Chinese animated triple fusee bracket clock, similar to the one in the image below, that is still fully functional, has sold for a sizeable fee at a recent auction. 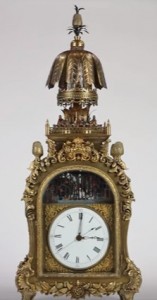 The vintage clock, complete with all-working, all-animated mechanisms led a catalogued antiques auction on May 21, eventually sold for an above-estimate $1,270,500, which was confirmed as the highest selling item in an event with some 525 lots on offer at an auction grossing in excess of $2.5 million.

The clock’s hourly mechanism triggers a beautiful choreography of swimming ducks and spinning glass rods resembling a waterfall as a cluster of glass rods forms another waterfall in the top of the large-size gilt bronze case.

The clock, which has a 6½-inch porcelain dial with black Roman numerals and red jewelled characters that read “Da Ji” (Great Prosperity) is 36½ inches tall, which is similar in size to the antique desk clocks we have here at POT.

Additionally, the auction featured not only a collection of alluring clocks, but also some antique watches, lamps (by Tiffany, Duffner & Kimberly, Unique, Bigelow & Kennard, Suess, Handel and others), paintings, music boxes, marble statuary, along with other jewellery, silver, and automatons.