As far as antique pocket watches for sale in London are concerned, you will find the exact magic that the Jaquet Droz brand was looking for when they described that they have ‘rekindled the magic of watchmaking in the Age of Enlightenment’ for their newest timepiece. 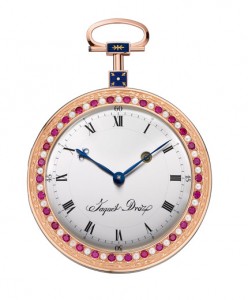 However, if you are content with the collection you have and you want to enjoy what the La-Chaux-de-Fonds-based brand have achieved with their new mechanical challenge. They have created a pocket watch bearing the signature “Jaquet Droz” and exclusively conceived around an original 18th century movement of which the external parts have sadly been lost to time.

The basis to this new movement was a Jaquet Droz timepiece dating from the end of the 18th century. It was a unique timepiece dreamt up by the firm’s artisans in order to celebrate the mechanical creativity of Pierre Jaquet-Droz, which also married perfectly with his awareness of beauty and taste for aesthetic refinement. The original crown wheel, or verge, escapement which originated in the 13th century and enjoyed a continuous reign over the horological world until the mid-19th century. The movement was completely dismantled and cleaned, with the process taking experts six months to restore.

The pivot holes were rebushed and the pivots re-polished to such a degree that the original gilt finish on the plate and bridges was preserved. Winding is achieved with a key inserted beneath the 2 o’clock index. The original key was missing so this was entirely designed and made in their workshops.

Enamel painters, engravers and jewel-setters from Jaquet Droz Ateliers d’Art developed a new exterior for the timepiece. You can observe a rather impressive secret signature of a four-leaf clover and the combination of Roman numerals (for the hours) and Arabic (for the minutes) on the dial. The case, fashioned from 18-carat gold, as was standard practice among watchmakers of the era, is ornamented with rubies and pearls so as to be in keeping with the jewellery-making techniques popular during the 18th century.

A timepiece truly inspired by a legendary past will now see this unique timepiece reserved exclusively for the Jaquet Droz Museum.