For many, the idea of purchasing an antique wrist watch, such as a vintage Rolex, in immaculate condition for the very reasonable fee of £1,000 would be a temptation too strong. However, you might want to consider with caution as its current proprietor says he thinks it could well be cursed! 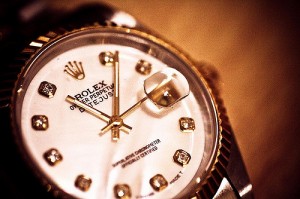 Mr Colin Brice recently put his Rolex up for sale on the online auction site, eBay, complete with humorous advert, sure to entertain readers, warning any potential suitors that buying the watch means they may incur the bad luck he suffers whenever he places the ‘evil instrument of horology’ on his wrist.

The accountant stated that within just a few months of making the purchase of the timepiece he lost his BMW, his business and it is claimed that he nearly lost his life in a head-on collision which resulted in severe injuries.

The item description read: “I am offering for sale my stunning Rolex Date Watch,”

“Sadly however, in the interests of full disclosure, I must inform interested bidders that this watch may have broken a mirror by hitting it with a black cat. I am quite sure that it is cursed.”

It goes on to read: “I hope that its curse ends with me and it brings its next owner nothing but smiles, happiness and marshmallows….but YOU HAVE BEEN PROPERLY WARNED.”

It was only in April of 2015 that Mr Brice acquired the classic black-face movement at a cost of £1,500. However, within just two months, Brice was left unable to walk following a car crash on the A52 near Nottingham.

His injuries were quite severe, with the father-of-six suffering a brain injury and shattered his hip and pelvis.

Mr Brice also said on his eBay ad: “Within two months of purchasing this pretty, but evil, instrument of horology, I had been involved in a head on collision that left me with a shattered hip and pelvis, broken ankle, broken figure and a brain contusion, not to mention a 3-series BMW that measured only 2.5 series in length.”

Our advice would be to avoid the timepiece and instead make a choice on a vintage watch from our non-cursed range!