Watchmaker Roger Smith was the guest of honour at Birmingham City University recently, when the world tour of film The Watchmaker’s Apprentice came around to the city. 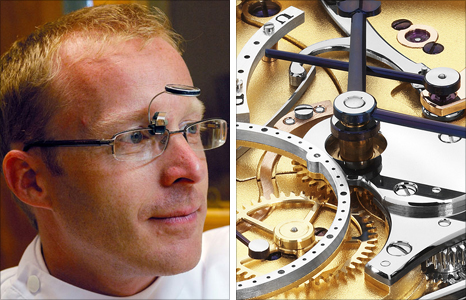 The film is based around Smith, who joined students from Birmingham City University’s School of Jewellery when they were offered the chance to view a screening.

Organised with the Antiquarian Horological Society and Birmingham City University, watchmaking students on the university’s BA Horology course had the opportunity to meet with Roger Smith as he was shown on a guided tour of the School of Jewellery and horological workshops. During the tour he took the time to inspect the work of the final year students before the screening.

Smith joined director David Armstrong after his tour to field a question and answer session, offering inspiring nuggets of information the next generation of watchmakers.

The film, The Watchmakers Apprentice, tells the story of George Daniels’ rise from poverty to become the world’s greatest watchmaker, and the one man who would become accepted as his one and only apprentice: Roger W Smith.

The public exhibition of the first BA Horology students work will be opening at the School of Jewellery on June 15. The Watchmaker’s Apprentice will be available on DVD and digital release from July 20.

If you love antique pocket watches for sale and all other forms of vintage timepieces such as half hunter watches, then why not take a look at Pieces of Time’s catalogue of movements.