While vintage watches in London’s Sotheby’s continue to sell on a frequent basis the latest news will certainly whey the appetites amongst their Asian bidders for fine watches next month. While the October 8 important watches sale isn’t anticipated to beat the HK$221.5m (£18m+) record set by the house in 2013, the 450 lots for 2014 are projected to achieve a total of at least HK$110m. 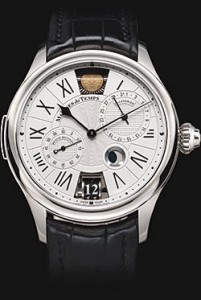 The highest prices are expected to be obtained by the finer examples of contemporary wrist watches, by makers including creations by Patek Philippe, Greubel Forsey, Richard Mille and A. Lange and Sohne.

However, with our Asian counterparts in the collecting world progressively looking for more sophisticated pieces, there is a shift towards valuable vintage models in both the wrist and pocket watch categories.

A superb example is produced that of Patek Philippe from 1984. This movement is a unique minute-repeating, perpetual-calendar, split-seconds chronograph made to order during a period when the company produced a limited series of one-off, grand complication pocket watches.

This timepiece is thought to be the only one with a full hunting case. Each of the two lids has been decorated with a portrait of the original owner’s son and daughter by G Menni, the distinguished enamel artist. Bidders for this item will find this fine example in virtually as-new condition, and with its original, bespoke stand. The watch is expected to fetch up to HK$5.5m.

Additionally there will be further offering from the Patek Philippe collections which include a range of recent, complicated wristwatches. This will include a reference 5216R minute-repeating, perpetual calendar tourbillon in pink gold – the brand’s fourth most complicated piece – which was bought new for HK$6.5m earlier this year.

It is estimated that it will to sell for HK$4.7m-HK$5.5m but, because of the difficulty of obtaining such high complication models, it is possible that the movement might surpass its retail price.