There are pocket watches for sale that go for sale every day all over the world. However, one famous pocket watch we recently included in our feature on the most important pocket watches of all time is now rather excitedly up for sale. It’s a sublime watch with ultra-complicated watch with 24 functions- including a moon phases, perpetual calendar, sidereal time, power reserve, and indications for time of sunset and sunrise as well as the night sky of New York City- which was almost unheard of, and definitely never produced previously. 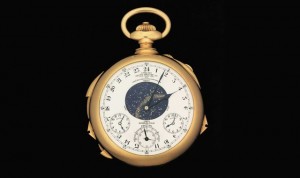 The watch in question is of course the Henry Graves Supercomplacation pocket watch.this watch was the product of Henry Graves’s commissionedwork by PatekPhilippe, whoin 1925 began his eight year masterpiece, taking the initial three years for research purposes and the following five for its manufacture. This eight year process produced the gold, open-face, minute-repeating chronograph with Westminster chimes, becoming the world’s most complicated pocket watch of all time made from a humans hand.

Sotheby’s New York sold this timepiece in 1999 at auction for $11 million, obliterating its estimated $3-5 million selling price. Now on November 14th 2014, Sotheby’s will once again offer this watch, in Geneva this time, the only difference being that the estimate is in excess of $17 million.

Since the 1999 sale, the piece has existed in the Patek Phillippe Museum in Geneva. The upcoming sale also corresponds with the Swiss watchmakers’ 175th anniversary.