Graff’s newest interchangeable watch with astounding white diamonds, 153 carats of jewels and happens to be the most expensive watch on the world!


We’re taking a slice of our day to appreciate this magnificent timepiece, by British jeweller Graff, which is one of the finest pieces you’re ever likely to see, which is reflected in its price tag of $40 million (£27 million). 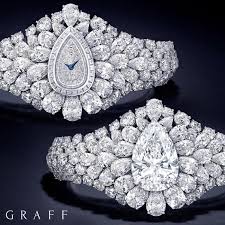 Labelled as the ‘world’s most valuable transformable timepiece’ by Graff, The Fascination can be worn as both a ring and as a bracelet, permitting the owner to display its beauty to suit whatever occasion they may be attending.

The dazzling watch integrates 153 carats of the very finest, most stunning white diamonds, while an interchangeable 38 carat flawless pear-shaped diamond can be worn as a bracelet or positioned in a tailor-made shank and then worn as a ring.

Graff created a stir at the 2014 BaselWorld show when it showcased a £33 million watch, believed to have been the most expensive in the world, named The Graff Hallucination.

The Hallucination was a 110-carat watch coated in colourful rare diamonds.

Graff Diamonds staff are rumoured to have spent thousands of hours making the lady’s watch, which possesses a colourful layering of diamonds.

Would you prefer to invest in this or create an amazing collection of antique pocket watches?