For the love of the Chronograph


The steep history of chronograph watch is entwined with the worlds of motor sport and racing in broader terms. A vision that comes to mind is Steve McQueen wearing a TAG Heuer Monaco in the film Le Mans, or perhaps Paul Newman with his Rolex Daytona at the celebrated circuit in Florida. 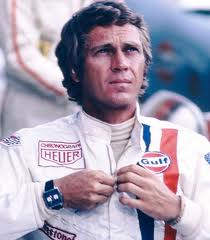 Many of us appreciate fine vintage full or half hunter watches but we have much to thank a man by the name of Louis Moinet. Moinet was the inventor of the first chronographic watch in 1836 and he originally designed the piece to time the movements of the planets, as early 1821 Louis XVIII was commissioning a particularly exquisite piece in order to time the races of his favourite horses.

Chronographs were also an important element to the firing artillery in the 19th century. Some of the most superb examples can be found from makers such as Reichsmarine. The advent of trench warfare for the period of the First World War signalled the widespread move of chronographs- similarly to most watches- from men’s pockets to their wrists. It was in fact during the Second World War that the Axis powers and the Allies were in competition for supplies of these key military tools from the neutral country of Switzerland.

But these days, although we might still use them as a stopwatch, the charm and appeal of the chronograph is chiefly that of any other “complicated” watch- something symbolic of excellence, splendour and luxury, as opposed to a scientific time-piece.

There is no doubt that these works of art can be striking. One fine example of this is the splendid 1927 vintage piece of Cartier’s from the house’s own collection.

We may be firmly in an era of digital technology, chronographs may appear as an anachronism, they are also fascinating to the point of romance, leaving no doubt that they are exceptionally collectible.