The London watch innovator Richard Hoptroff has added an extraordinary new addition to his collection of creations with the conformation of the Europe’s first atomic wristwatch. 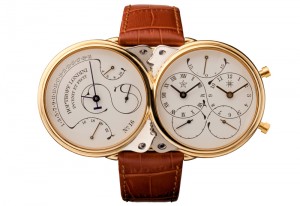 Hoptroff, is renowned for creating Bluetooth-enabled and atomic clock-powered movements in his workshops located in South Bank, London. He unveiled Europe’s most accurate timepiece, the No. 10, last year by facilitating an onboard atomic clock as regulator.

Just a year later and the physicist and entrepreneur has produced the No.16 by reemploying the same method but with a distinctly different design. The wristwatch uses an infinity double dial design allowing enough space to minimise width and thickness ensuring comfort on the wrist. Now this may not be something you would be too interested in if you were looking at antique watches for sale but it deserves recognition nonetheless.

The timepiece boasts eight complications in its display, with time, sidereal time and equation of time on the right face and perpetual moon phase, perpetual date, sunrise, sunset and power reserve on the left. Two face figures bridge the dials with eyes of blue sapphire that glow once per minute.

The No.16 is the most accurate wristwatch on the planet, so accurate that it is withing one-and-a-half seconds every thousand years or one second per hundred years in low power mode. In low power mode the rechargeable No.16 has an estimated battery life of three months.

There will be a limited number of the Hoptroff No.16 produced (100) in either 950 platinum, 18ct gold and tarnish free Britannia Silver with prices beginning at £8,150 exluding tax.