A Corum watch worn by Elvis Presley and gifted to a friend, which could fetch as much as $20,000 (£14,056), is one of the antique wrist watches set to grace this month’s New York sale by Antiquorum Auctioneers. 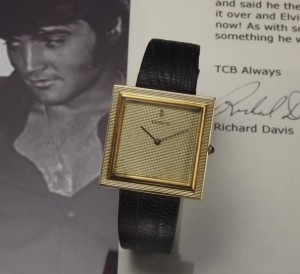 The auction will also be offering some exclusive Patek Phillipe movements, which are sure to be the only lots that could possibly overshadow the King of Rock and Roll’s watch in terms of the prices they fetch, given that they are thought to be selling for as much as $550,000 (£351,778) on 20th April.

However, the fans of Corum and Elvis will surely battle it out for the “Buckingham” model that is an interestingly sought after timepiece. The oversized square 18-karat yellow gold watch was one of Presley’s favourites and made around 1960, which is roughly the time Richard Davis began working for the star. Davis performed a number of different roles such as valet, wardrobe helper and guard up until 1971, after which he remained a close acquaintance until Presley’s passing in 1977.

The story behind Davis acquiring the watch goes that one day when the two were talking, when Elvis took the watch off, saying there was something wrong with the back of it. He passed it to Davis – who found it had been inscribed “To Richard, From E.P.” The King – who was known for his generosity to those close to him modestly said: “I guess it’s yours now.”