During the renaissance period the first watchmakers weren’t the craftsmen that we think of today, they were mostly skilled silversmiths and goldsmiths who made crude early clocks. Coming from that artisan background, it’s unsurprising that even the earliest clocks and watches were profusely engraved and adorned with decoration.

We’ve sold a few of these early timepieces over the years, the image below is from an early drum timepiece that was made around 1540 in Germany, you can see the engraved floral decoration around the edge of the case and a beautiful engraved sunburst design on the dial.

is another German example of a watch case from 1610 with heavy mercury gilding and a beautifully chased and decoratively pierced case.

was made around 1640 and really illustrates just how elaborate the decoration was on early timepieces. The 22 carat gold filigree outer case made from twisted gold wire and applied gold beads must have taken an incredibly long time to execute to such a high standard. Even the outer protective shagreen leather case was decorated with a star design using gold pique pins.

From around 1620 watchmakers began to use enamel to decorate their watches, some of the earliest forms of enamel decoration were cloisonné and champleve, these techniques reached Europe from Byzantium in the middle ages. Champleve enamelling is named as such because the technique used, involves carving shallow indentations onto a piece of metal and the hollow space filled with enamel until the cell and surrounding area are flush with each other giving a uniformed and pleasant appearance. This method of enamel decoration is also used on Champleve dials from the mid 18th Century, giving the numerals a prominent and striking feature.

watch case below is an early example from around 1640. Cloisonné enamel was first used in jewellery making in ancient Egypt and was used to adorn jewellery and statues . It was most commonly used in the far east, especially in China, and found its way to western europe via the silk road. In this early piece its possible to see the wire which is used to frame each individual cell of the enamel picture. 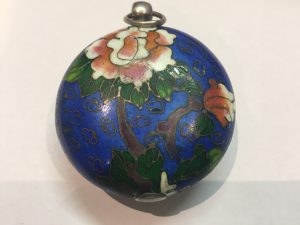 is an interesting example of a type of decoration that was becoming popular from the late 17th century.

In our next post we will discuss the use of reupousse work and other goldsmithing techniques.