To celebrate watchmaker Patek Philippe’s 175th anniversary, Christie’s is hosting a thematic auction on November 9th at Geneva’s Four Seasons Hotel des Bergues. The celebratory event will see sales include a total of 100 lots, including everything from 19th-century enamel pocket watches to 1980s complicated wristwatches. So if you’re in the market and antique watches for sale in this exclusive auction appeals to you then take a look at this historic auction: 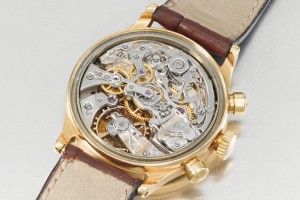 The Patek Philippe 175 will be the second thematic auction that Christie’s has held in as many years. Just like 2013’s Rolex Daytona “Lesson One” sale, there is an anticipation of world records being set, millions being spent on unique watches, and an atmosphere as close to a rock concert as a watch auction can get. There will be twice as many lots, and the potential for things to get crazy will be half the fun.

For this sale, Christie’s has collected 100 watches that cover the entire vintage era of Patek’s history, from 1839 until the 1980s. While emphasis is, predictably, on the high-end lots, low estimates range from 5,000 CHF ($1,069) for an 1899 pendant watch featuring an engraving of Hercules, to 1,600,000 CHF ($1,710,525) for a pink gold, first series reference 2499 perpetual calendar chronograph. There will be 53 wristwatches, 42 pocket watches, four clocks, and one original 1893 technical patent document in the sale. Approximately 25% of the watches are accompanied by their original boxes and papers, and more than 50% are so-called “fresh to market” watches, meaning they come from the original owner’s family and have never been publicly sold.

Rounding out the high-end of the sale is a reference 1563 split-seconds chronograph. Only three 1563s were ever made, and each is unique. One resides in the Patek Philippe museum in Geneva and was originally owned by jazz legend Duke Ellington. Another, with luminous Breguet numerals and sword-shaped hands, was sold last year by Christie’s for a little over £919,710. This watch comes from the personal collection of Jean-Claude Biver, director of timepieces for Louis Vuitton Moët Hennessey, and is the last of the trio. It has a two-tone dial with pulsation scale around the edge and is in immaculate condition.

The Christie’s Patek Philippe 175 sale is likely to become a milestone in the world of watch collecting. The 150th anniversary sale held in 1989 by Antiquorum, an auction house specializing in watches, was the event that catapulted Patek collecting to its current (slightly insane) heights. Collectors nostalgically murmur about the pre-anniversary auction days, when top watches could still be had for sub-million-dollar prices. Those days are long gone and Christie’s has no intentions of looking back.

Each watch will come with three keepsakes to commemorate the sale. The first is a silver coin struck by Christie’s, each individually numbered to match the lot number of the watch it accompanies. This coin will be presented in a wooden box that is custom designed to fit each of the watches in the sale so that the two can sit side-by-side for posterity. Finally, each watch comes with the archive paperwork from Patek Philippe, appropriately dated November 9, 2014.