The best place to find antique watches for sale is of course through the registered dealers who can give you advice, guidance and more often than not a selection for you to choose from. However, every once in a while a vintage gem can pop up elsewhere and in this case a watch was donated to a charity shop in Edinburgh and is now set to be auctioned to raise funds to help the homeless as it turned out to be a vintage Rolex. 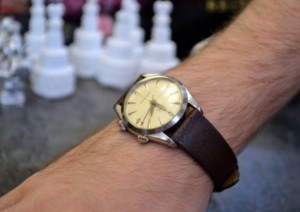 The Rolex in question is a 1960s Tudor Advisor, which was handed in to Shelter Scotland’s Morningside charity shop as part of a selection of other items in a bag.

Valued at nearly £1000 in its current condition, this movement would usually fetch around £2000 in mint condition. The classic watch which features a leather-strapped watch with stainless steel body and bevelled glass face was entered in a silent auction.

Remarkably this is not the first time that a vintage timepiece has been given to the Morningside shop, it is in fact the second time in less than three years.