Champion boxer relieved to be reunited with prized timepiece


We all know the feeling of frustration when something important to you is mislaid. Half hunter watches and antique wrist watches are just two of the examples of precious timepieces that will have gone missing from someone’s possession and are of great value. But just how many people would expect to relocate their prized movements like the famous boxing champion Manny Pacquiao? 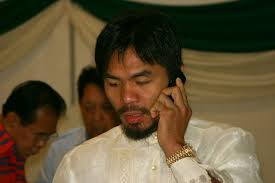 Fortunately the eight-division title holder Manny Pacquiao was happy to post on social media that his prized gold Rolex watch that he left behind in a five-star hotel in Manila was found. He made the post on his Facebook page from the Venetian Hotel and Casino Macau.

Pacquiao, just days earlier, had posted a plea regarding the loss and offered a reward for the finder. He pointed out that it is more expensive than a Ferrari.

In an earlier post, Pacquiao said the watch costs $585,000, but that it wasn’t not water-resistant, so he took if off before washing his hands but forgot about the timepiece.

The boxer said the watch is one of only 11 such watches made in the world owned by celebrities with the likes of Brad Pitt, Bill Gates, Kobe Bryant, Prince Charles, and the former Prime Minister of Thailand Thaksin Shinawatra.