Many peoples’ admiration of antiques, and antique wrist watches, stop at collecting, but not for Todd Sloane. Sloane is fascinated by the mechanics of a wide range of antique products and this fascination has turned into the subject of his art. 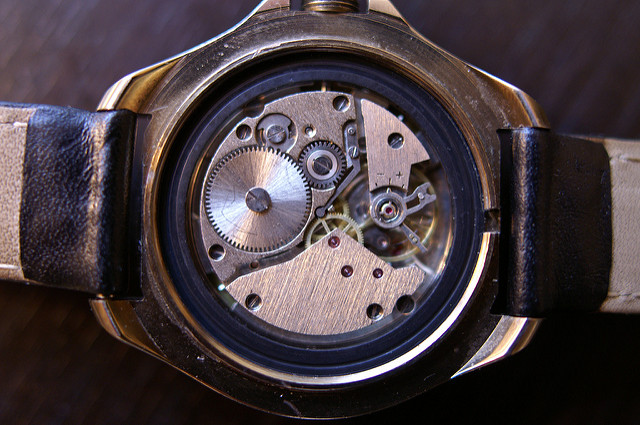 Sloane is the Creative Director at Tag Advertising in Canada, a serious job that often needs a fun outlet. His love of science fiction and collectibles has seeped into the Mission offices, where twenty-four of his ray guns being displayed. Like many in the creative industries Sloane has a creative outlet that differs from the world of advertising.

Sloane will hunt through the antique stores, junk shops and online for antique wrist watches, radios, TV sets, dolls, oil lanterns and auto parts that he can repurpose for his creations. These collectibles date from the late 1800’s up to anything as recent as 1960. Sloane picks these items due to his admiration of great industrial design and this admiration can be seen in his creations – his little, otherworldly robots that are an artistic mix-match of everything he finds at the stores.

Creating the robots is a relaxing process for Sloane, “I love the peace and quiet of working on them,” Slone says. “If I get a couple of free hours and a big cup of coffee, I’m in heaven.”

We’re only a week away now!! pic.twitter.com/9W3B2ucgAo

His creations come from a mind obsessed with the sci-fi genre. He grew up watching Star Trek, studying UFO’s, fascinated by ray guns and Martian landings which all sparked an active imagination. Young Sloane collected sci-fi comics, as well as robots and space vehicles which amounted to an impressive collection of more than 50 tin toys by his teenage years. His creations recently went on show and sale at the Tag advertising office, on 20th October, where 18 of his large robot which stand at about 45 centimetres tall and 15 of his smaller creations were displayed. They were marked with price tags that ranged from $500 to $6,000.

Known as “The Salvaged Ones” Sloane has created a collection of individual personalities that transports viewers to a sci-fi future whilst simultaneously leaving them with nostalgic feelings for the age of manned space missions.

8 days until the show! pic.twitter.com/bJBZgMp3Oy

You can look at more of his creations at sloaneconcepts.com

The mystery and lure of his pieces make you want to examine the pieces closely to determine what each piece is. Is this a mechanic from an antique wrist watch? What era is that? How would that piece work? And surely this is what makes a great piece of art, by grabbing the spectator’s attention and fascination, making them raise a million questions about the piece. That is what grabs us, and so many others, about antique wrist watches.