Antique pocket watches have been known to turn up in some strange places but this story is one to remember. Recently a man was left ‘gobsmacked’ following an unexpected reunion with £3,000 worth of family heirlooms that had been lost for almost a decade thanks. 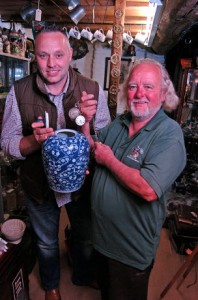 Phil Sims, the owner of an antiques store in Belbroughton, Worcestershire had quite the surprise when, upon opening up a large ginger jar, priced at lowly £20, which, he said, felt unusually heavy, he found something rather special.

On closer inspection he discovered some items that were carefully wrapped in newspaper- some of which dated back to 1820- including a host of pocket watches, 1920 ebony and ivory elephant ornaments along with two Victorian Stanhope viewers.

Phil said when he was in a pub around a 12 months ago with fellow dealer Steve Bubb, he’d heard about a number of his family’s pocket watches, which included a solid silver and 22 carat gold one, that had be misplaced.

Although Steve had already spent time turning his house upside down in his efforts to locate the missing timepieces, he had begrudgingly accepted they were gone.

The jar, unbeknown to anyone, was housing two of Steve’s granddad’s pocket watches – his best one which dated back to around 1891 and the other from the First World War.