A brief history of pocket watches and their value


Despite the popularity of the wristwatch superseding the pocket watch post World War II, antique pocket watches for sale are most definitely regarded as highly desirable and collectable in today’s market. The value of any watch is predominantly established by who the maker is, as this gives a strong indication of the quality and complexity of the movement. 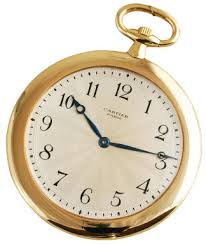 We can date early pocket watches back to at least the mid-16th century. These examples are of course extremely rare. A good example of this would be a finely chased and engraved German Tambourwatchcase and dial from the mid-16th century. This movement could fetch an asking price of around £15,000-25,000. At the end of the 17th century as technology advanced so did the accuracy of the pocket watches. This was a time when Britain was producing a host of the most impressive timepieces the world had to offer.

As you can imagine it was predominately the wealthy who we fortunate to own pocket watches roughly until the time of the Industrial Revolution, when production methods improved, distribution increased and prices decreased, thus making watches more affordable and accessible. The rise of the middle-classes in the late 19thC also meant that more people could afford their own pocket watch. The progress in time-keeping was essential to the growth of the rail-roads, particularly in America, where drivers needed accurate watches to plan their journeys and avoid collision with other railroad users.

Further advances in technology toward the end of the 19th century meant that watch-owners we able to benefit from a variety of features such as repeaters that chimed, snap-closing hunter cases, moon phases, and Chronograph mechanisms.

It is worth noting that due to the high number of pocket watches produced during this era, the possible asking price they could reach today will most likely not reach the higher premiums. The exception apply of course if they are particularly rare, made with fine materials or made by a well renowned maker. An 1868 hallmarked and signed diamond-decorated pocket watch by the familiar maker Charles Frodsham can be purchased for less than £200, meanwhile a very collectable 1920s Cartier 18ct gold example with an enamelled Egyptian Huntsman scene could ask the premium level estimated price of £5,000-10,000.