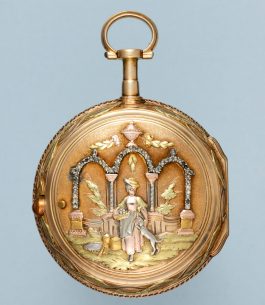 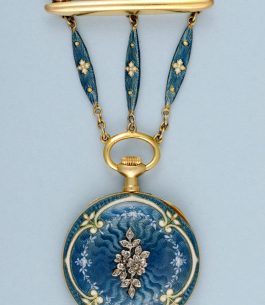 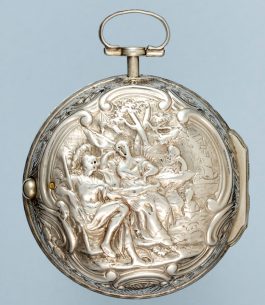 Probably a Dutch import which has been retailed in England.  The casemakers mark is that of Thomas Carpenter, 5 Islington Road who entered this mark in September 1775
Date :  Hallmarked London   1774
£985.00
Silver Chinese Market Duplex Pocket Watch 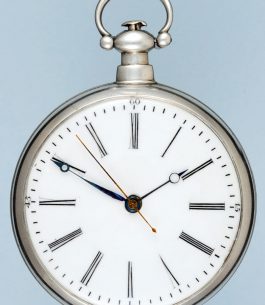 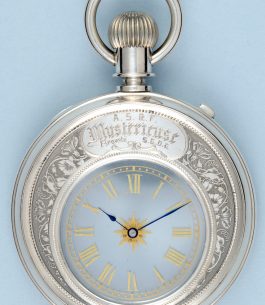 A late 19th Century Swiss mystery watch in a silver double sided case.  The gilt cylinder movement relegated to the crescent shaped portion of the watch between the glass dial and the pendant.  Keyless with going barrel, the crown turning in one direction only.  Small plain three arm gilt balance with blue steel spiral hairspring, polished steel regulator.  Polished steel cylinder, steel escape wheel.   Glass dial with gilt Arabic numerals, and minute ring, decorative engraved silver masks.  The blue steel hands are driven by a glass disc which has a toothed brass wheel attached to its outer edge engaging the train.  The miniature motion work for the hands is set between another glass disc and the dial.  There is no provision to set the hands apart from moving them manually, which is common in these watches.  Plain silver case glazed back and front.  Rectangular button in the band to release the sprung front cover, silver crown and bow. 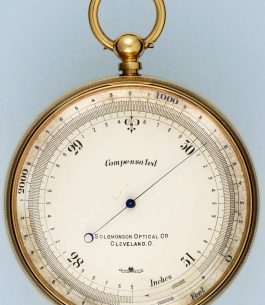 A large late 19th Century English aneroid gilt pocket barometer.  Silvered dial marked for the American retailer, the scale marked in inches of mercury, blue steel hand.  At the edge a scale marked for altitude in feet which rotates with the bezel to compensate for height above sea level.  Large plain gilt metal case with flat crystal glass, milled bezel. 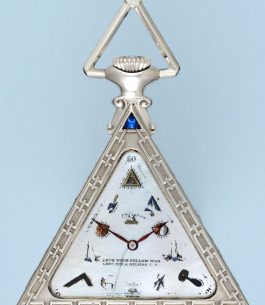 An early 20th Century Swiss lever Masonic watch with mother of pearl dial in a triangular silver case.  Circular keyless nickelled bar movement with going barrel.  Plain cock with polished steel regulator.  Uncut balance with blue steel spiral hairspring.  Club foot lever escapement.  Triangular mother of pearl dial with polychrome Masonic symbols in place of the numerals and “Love your fellow man – Lend him a helping hand” below the centre.  Blue steel hands with pierced triangular heads.  Silver case with decoration of a chain around the bezel, a triangular blue stone below the pendant, triangular silver bow.  The back, which is hinged to form an easel stand, is chased and engraved with a temple and many other Masonic symbols.  The edges of the case also decorated with further masonic symbols.  Plain clip on silver cuvette. 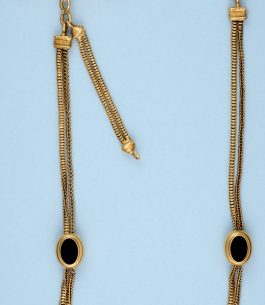 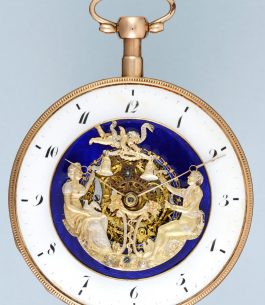 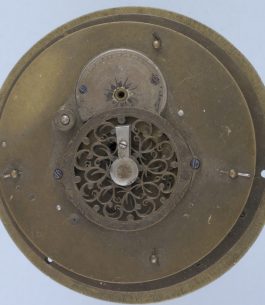 Large full plate fusee movement.  Finely pierced and engraved bridge cock with steel coqueret, silver regulator dial.  Pentagonal baluster pillars, winding square at the front.  The movement, fitted to a larger plate for the dial, was probably originally used in a barometer or other piece of furniture. 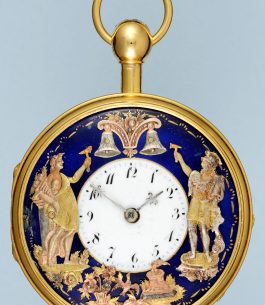 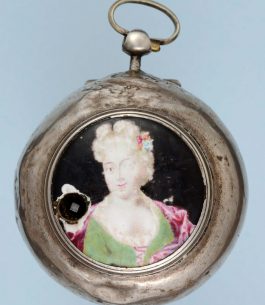 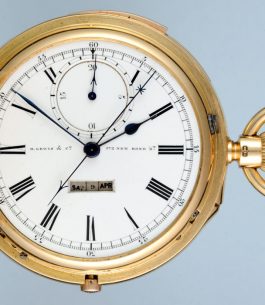 A fine example of late 19th Century English watchmaking.  One of the more complex movements made by the firm of Nicole Nielsen with the rare inclusion of an unusual form of calendar.  Nicole Nielsen manufactured for many of the eminent watchmaking firms in the second half of the 19th Century. Some were also retailed in other countries such as Australia and America, Tiffanys being one of their principal customers.  Casemaker Emil Nielsen, 14 Soho Square. 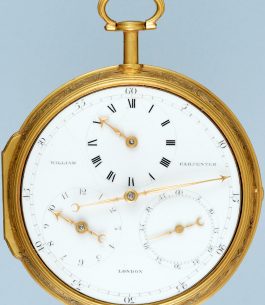 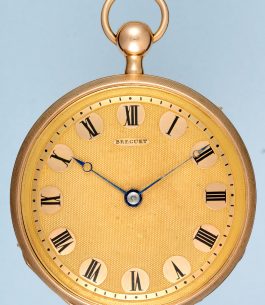 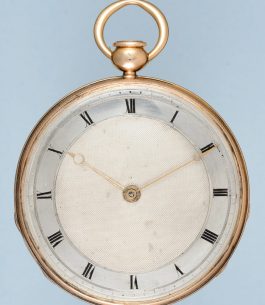 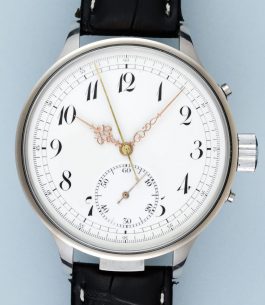 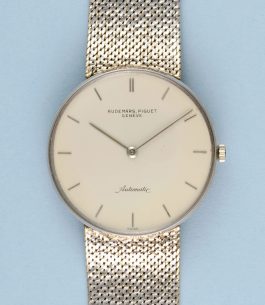 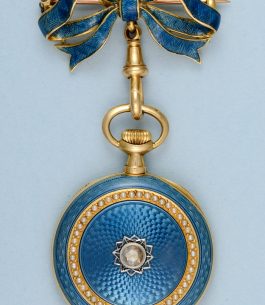 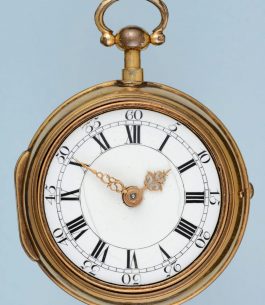 A rare chance to purchase an early example of a Tompion repeater.  He employed an unusual form of repeating work where the teeth of the rack is hinged and moved vertically when the pendant is depressed.  It requires care in its execution and does not appear to have been copied by other makers
Date :  Circa   1698
£7,750.00
English Verge by George Graham 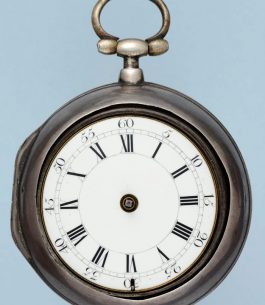