As far as vintage watches are concerned we can’t image that many collectors of fine creations such as the Bulgari Serpenti watch, which was owned by Elizabeth Taylor, would pass up the chance to acquire said item easily. 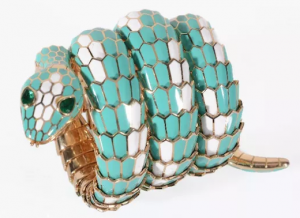 The London auction house Dreweatts & Bloomsbury will be putting this fantastic timepiece under the hammer as part of its Iconic Jewels auction on November 27.

Taylor was photographed wearing the turquoise and white enamel movement over half a century ago in 1962 on the film set of Cleopatra. It is estimated that the watch could fetch between £19,815 – £ 29,721.

“The history of the selling prices at auction for these watches illustrates how the demand for iconic jewels has risen in the past 25 years—and how they can be a rewarding alternative investment as well as something wonderful to own and wear,” said James Nicholson, international head of jewelry and watches at Dreweatts & Bloomsbury.

We anticipate that there will be some fantastic opportunities to acquire men’s vintage watches in the coming months too.